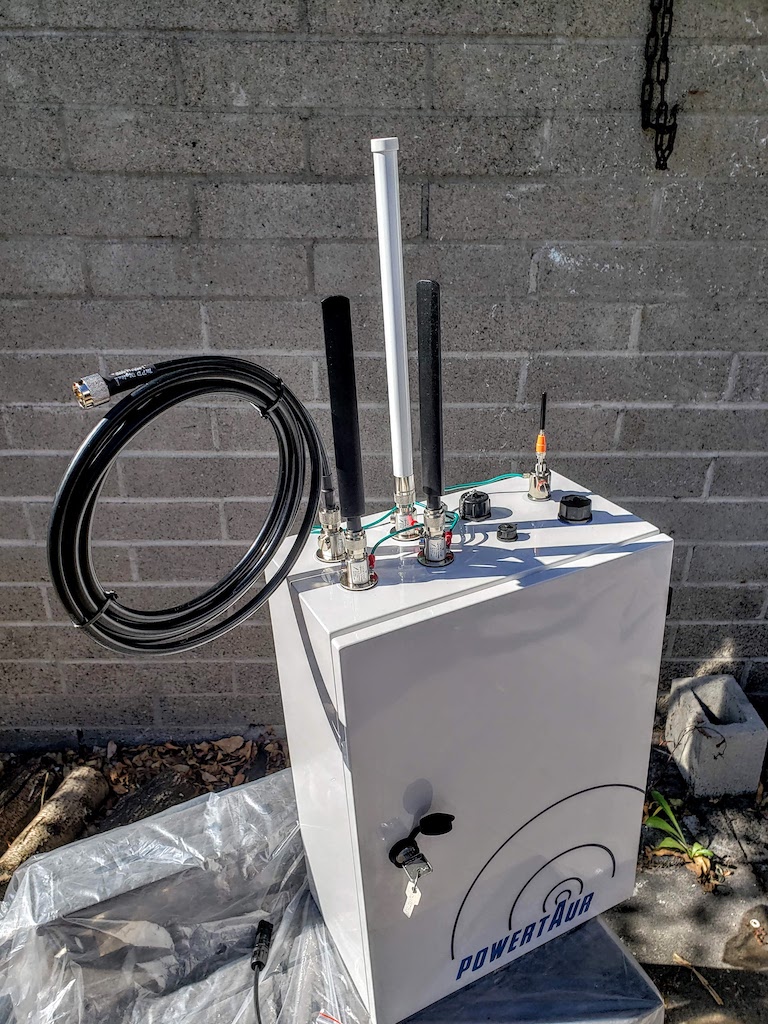 The Quasar is an enclosure model focused on enabling outdoor, off-grid solar deployments with IoT gear.

The Quasar enclosure includes all features up through Powertaur Pulsar enclosure and a complete solar power management system, networking, and antennas.

The enclosure has a redundant internet router(backhaul) that manages best link across Ethernet, Wifi and Dual LTE Celluar by adding one or two of your own SIM cards. Make sure to survey your deployment area for potential Wifi AP access and Celluar coverage via  LTE Coverage Map.  And also check the expected solar coverage in your deployment area -  Average Peak Daily Solar hours Map.  For solar, ideally at least 3.5+ hours of sun light on average per day over a 1 year period. That's assuming a 100w panel, and your system load is not more than roughly 25Wh.

The cabinet paired up with the optional Powertaur Charge 120 Amp Hr battery. 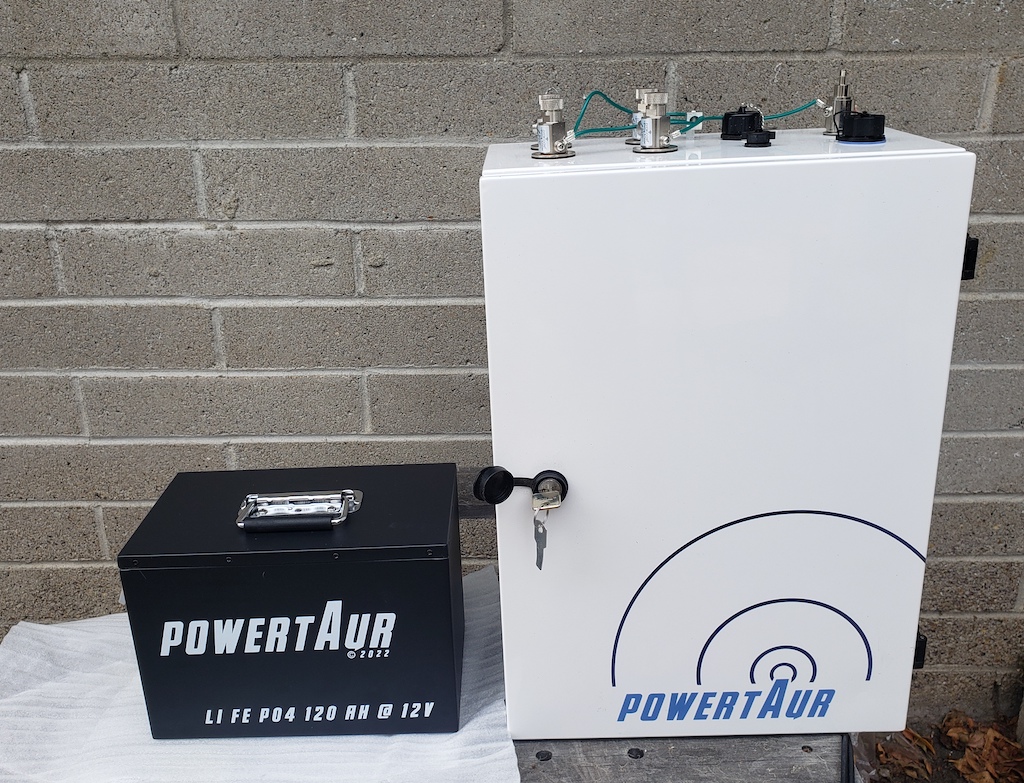 Power, Data, RF interfaces, and the wall and pole mount brackets for reference. 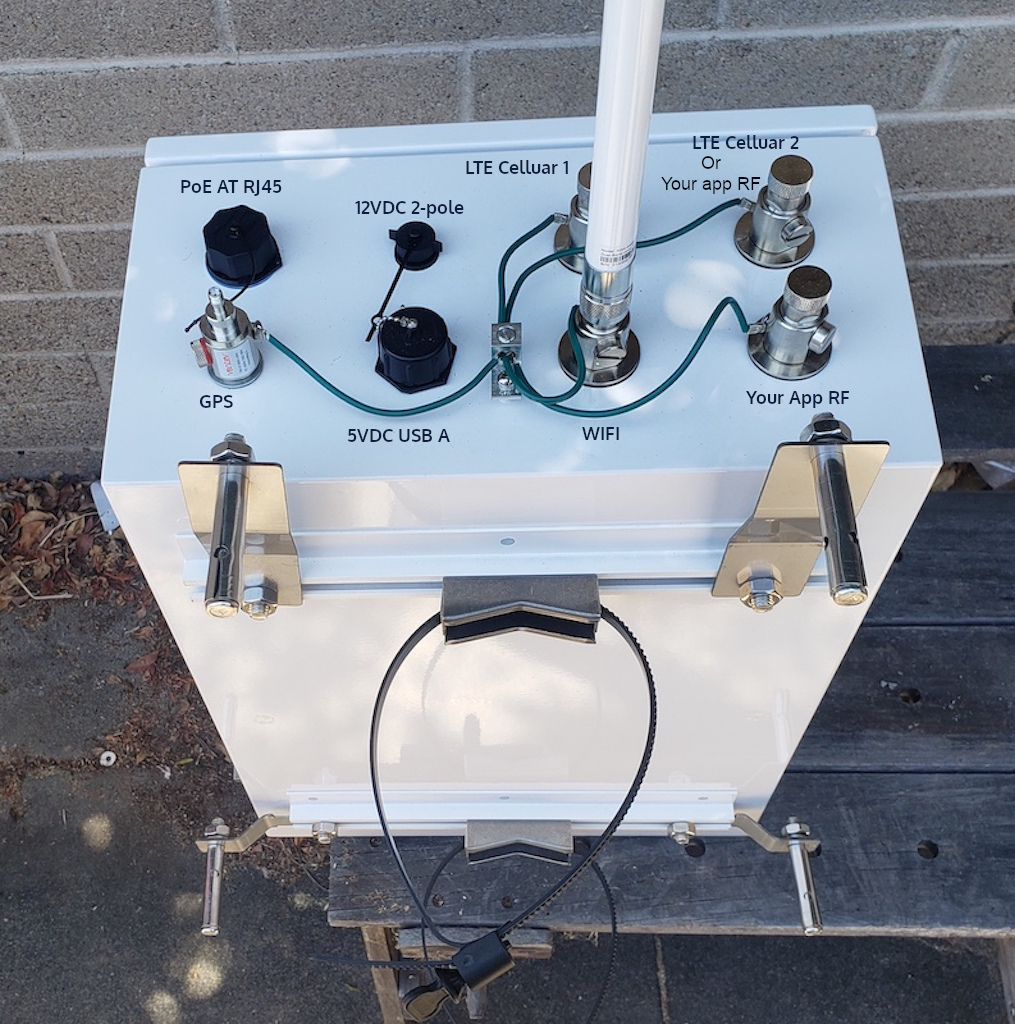 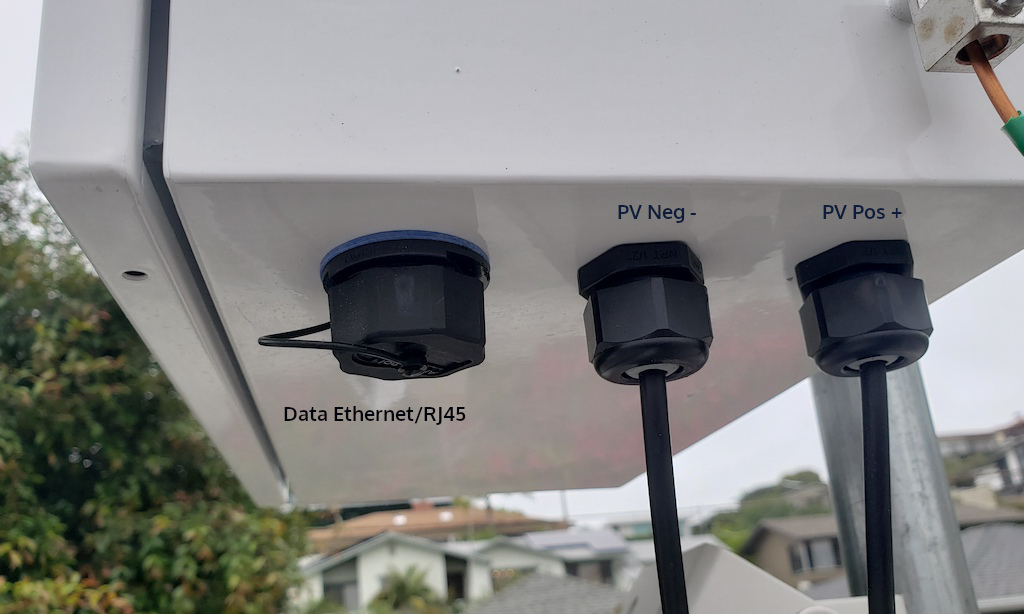 Don't forget to wrap each antenna with supplied waterproof tape. 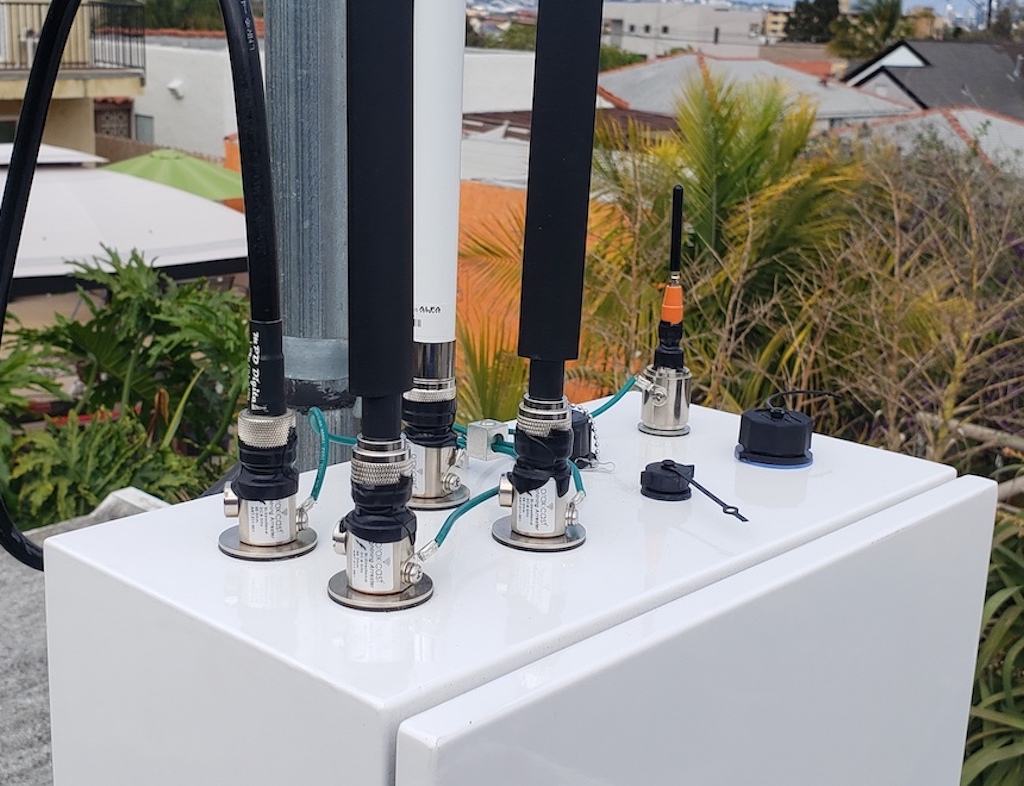 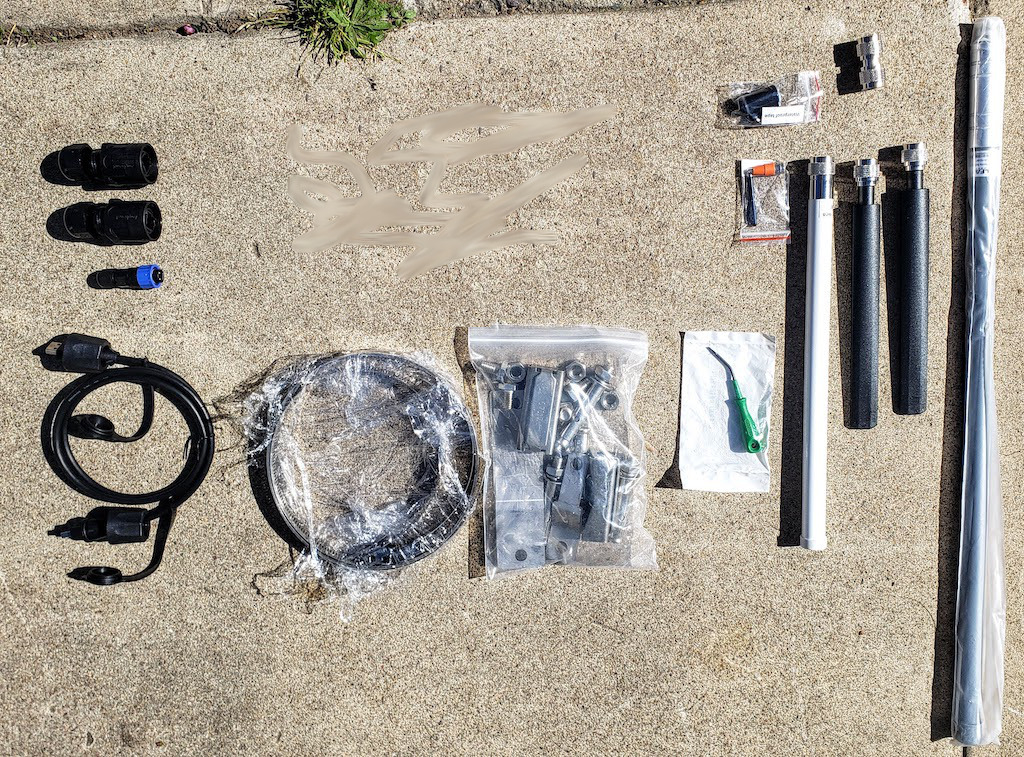 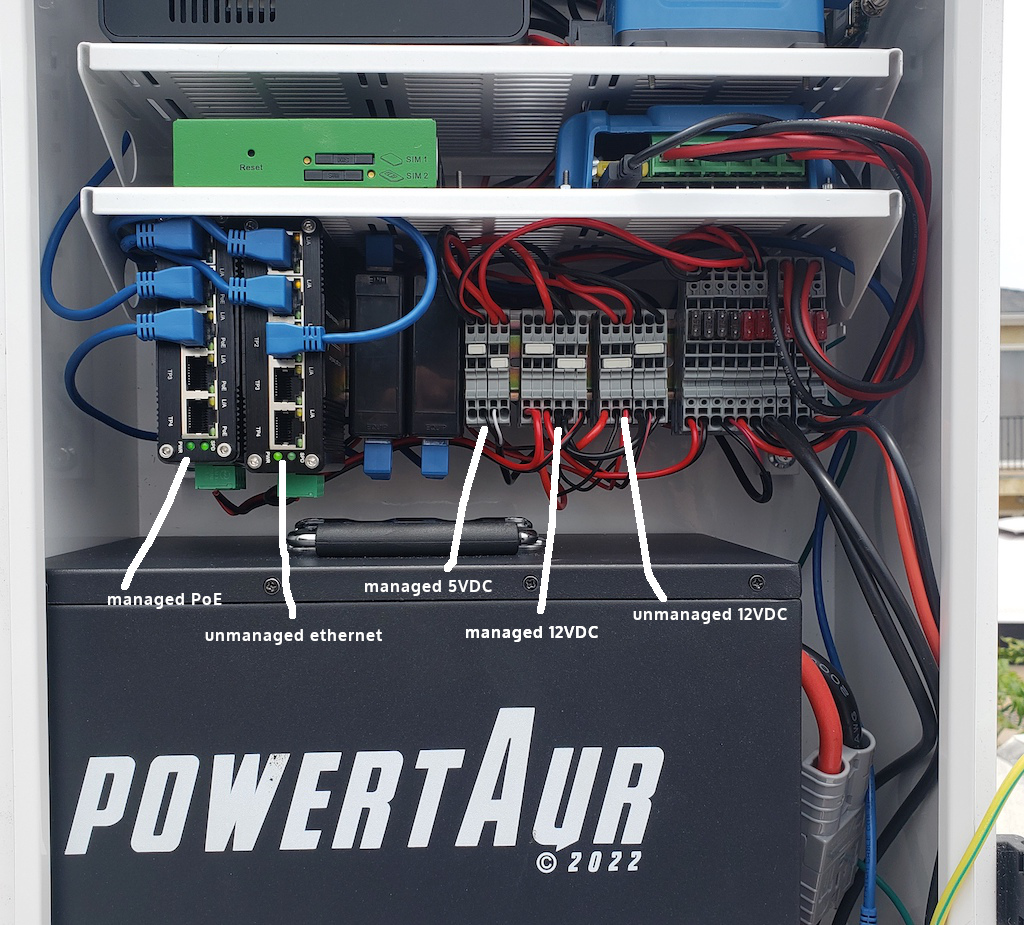 The interior spatial layout, you get 6.7x7.5x11 inches on the bottom and you get 7x3.5x5 inches in the upper left corner. 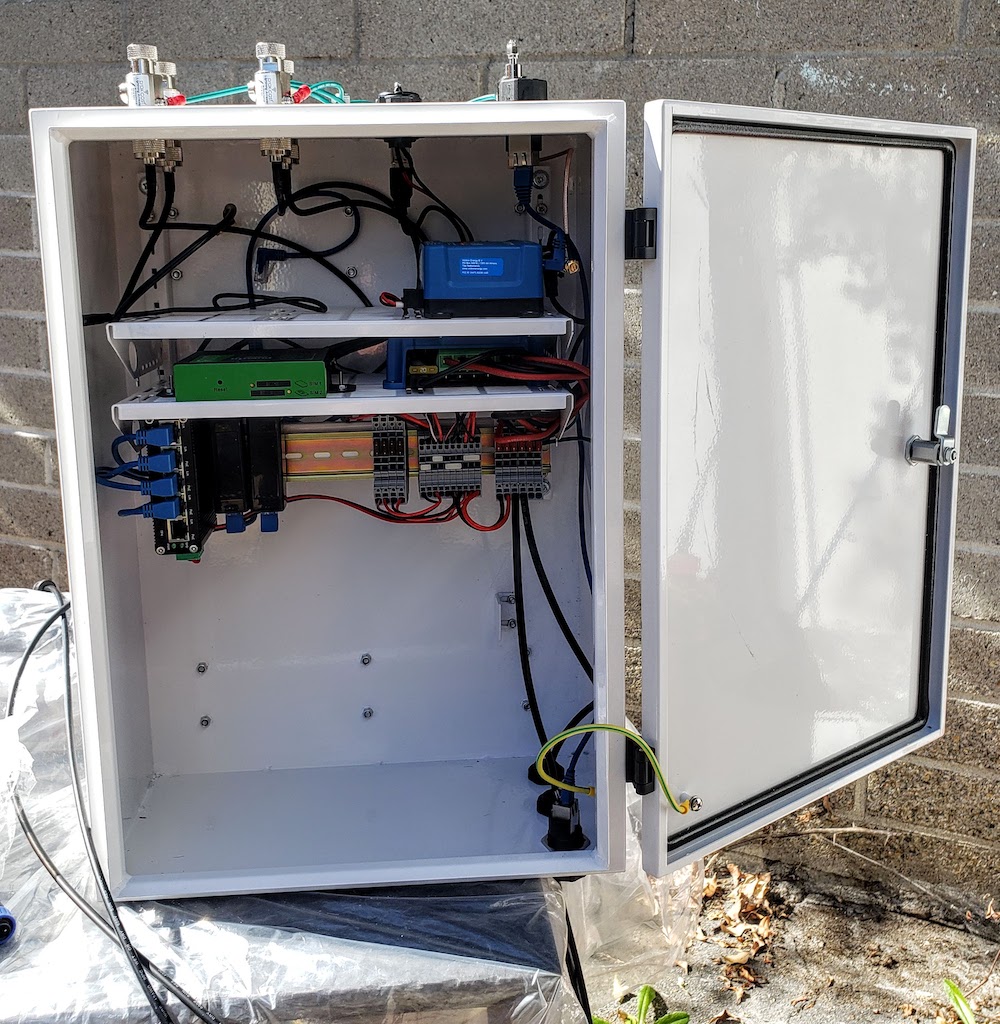 An example of connecting a 3rd party Helium/HNT miner into the cabinet. The Quasar cabinet includes (3) cables to provide common interfaces usually needed by miners or any IoT device, a 5VDC USB C/3.0 power, Data over PoE+ ethernet, and RP-SMA male connector linked up to N-Female antenna bulkhead on top of cabinet, which for the miner would have the LoraWAN Antenna on top. This sequence of photos depicts usage of the cables to wire up a Sensecap indoor HNT miner. 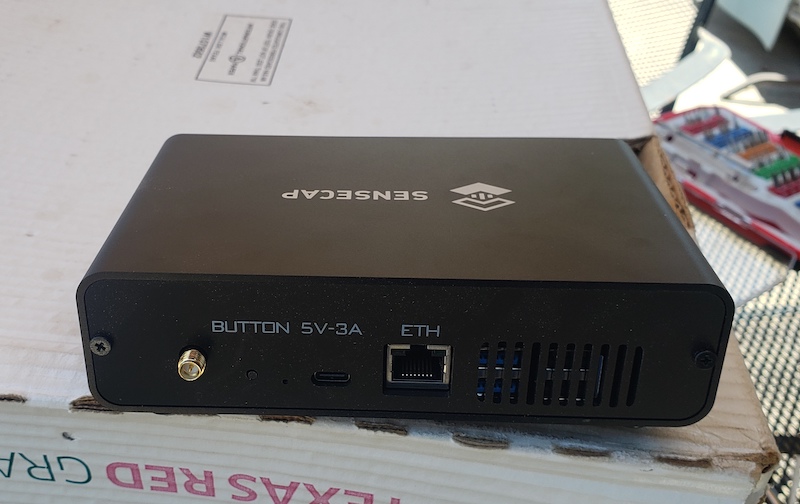 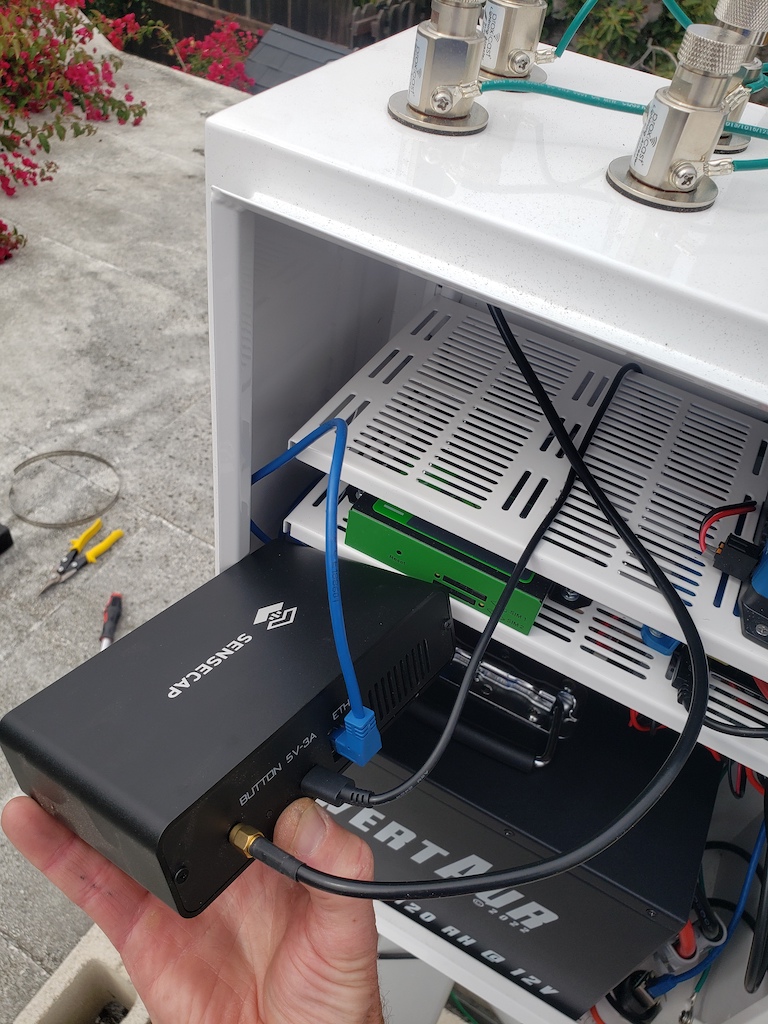 IoT device  placed in the cabinet, with hookups for 5VDC USBC, POE, RP-SMA for RF antenna.. 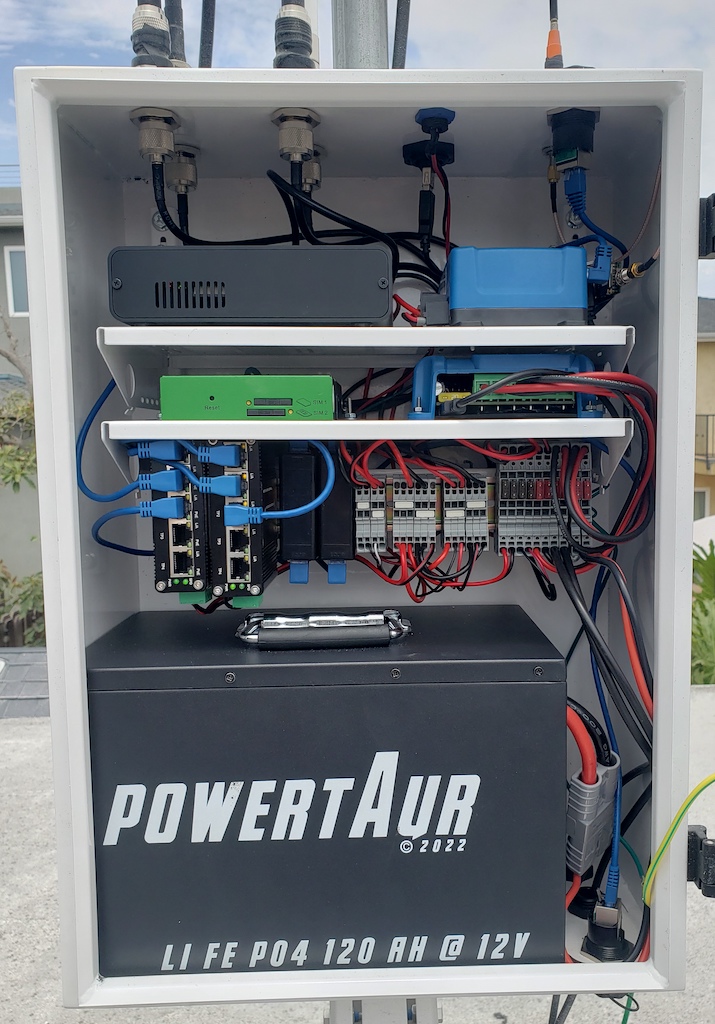 A demonstration of the free space and capability to place your own IoT devices. Example of indoor helium miner, the RAK MNTD, placed into the cabinet using the provided hookups in the cabinet for 5VDC usb power, RP-SMA antenna, and internet via RJ45 ethernet. 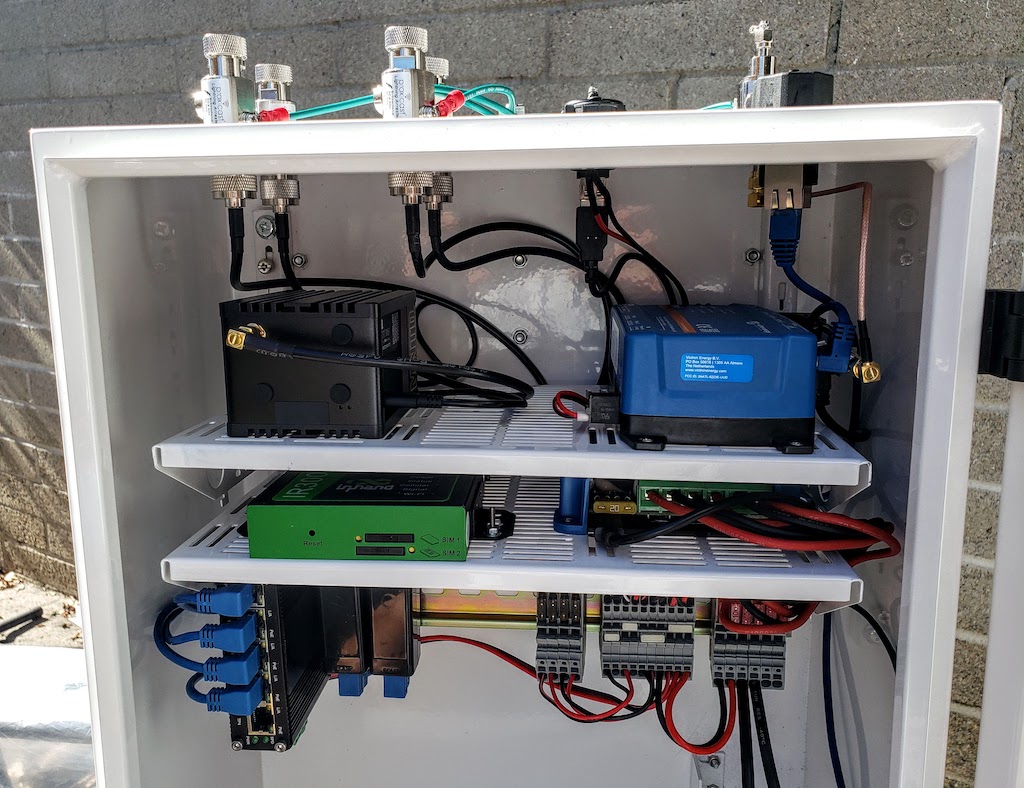 The InhandGo LTE/WIFI/Ethernet router provides a remote management portal for real time reporting and administrative control of all networking of the cabinet.

The default configuration for WAN(Internet) redundancy has Wifi as Primary and LTE Cellular as Secondary interfaces to poll for internet access. If using LTE Cellular, put a SIM card into the tray, and the router will auto-sense when it's inserted and try common carrier APN configs, so, it may be totally plug-n-play, if not, then you go into admin here to configure APN for the card. 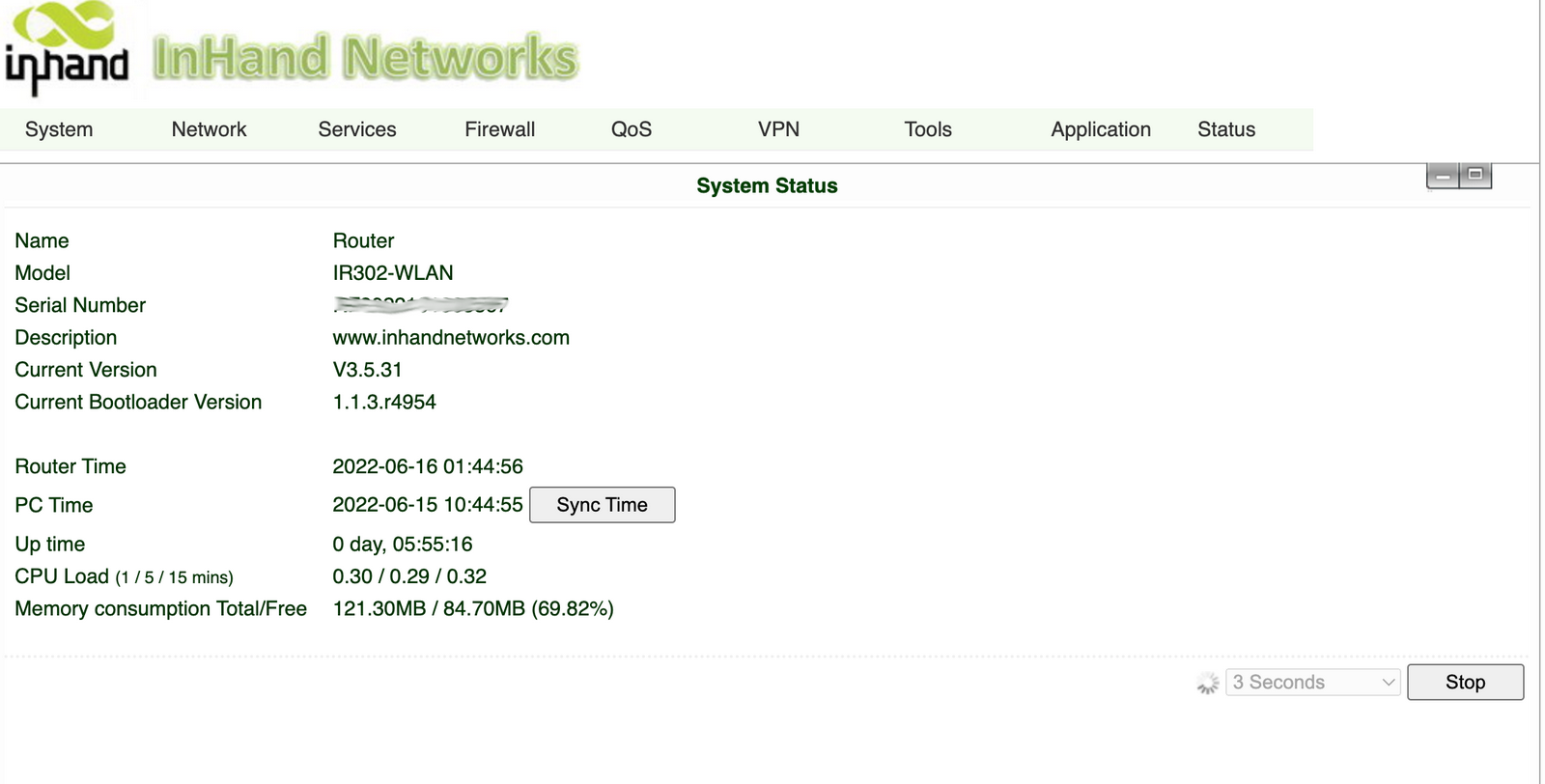 The Victron Solar system provides a remote  management portal called VRM , You register as user on VRM Portal, and then register for the Serial Id from the equipment installed in the Quasar cabinet, You can login to the Portal and view real time data on GPS location, temperature, and power aspects like Solar PV generation, Load usage, Battery in/out, etc, and define Alarms(email) on those metrics.

You can bring up remote admin console from the portal into the Victron Cerbo GX in the cabinet and drill into details on connected components, such as the MPPT charger, relays, I/O ports.

Quasar cabinet utilizes this IoT HW/SW functionality in Cerbo GX by connecting one of the two Relays included on Cerbo GX and using it to provide remote control of the 'managed' 5VDC, 12VDC, and PoE rails in the cabinet. This Relay is 'NC' meaning it's normally closed, so, by default 'managed' power is ON, you can toggle the state of relay from remote admin, and it will then shut off power to all 'managed' circuits, then toggle the relay again, and it reconnects battery power to the 'managed' circuits, effectively performing a 'hard' power cycle of all application components remotely.

You don't lose connectivity to the cabinet while this is done, since the non-app components are on 'unmanaged' circuit which does not lose power, this can be useful in troubleshooting application problems, sometimes a reboot is only way to get a device to come back up.

The Victron Cerbo GX is an IoT hub, it offers many input interfaces for serial, digital I/O, and a relay. So, you can extend on that for building out IoT applications like sensor networks, remote switching, etc., which goes beyond the initial scope used in the Quasar cabinet of connecting the MPPT solar charger to the Portal, and remote relay.

The below screenshot is dashboard view on the Portal, is great for real time summary of your system performance. This example shows 59watts of energy flowing in(it was connected to 100w solar panel) at current moment, and net 49watts of that is being routed as charge to battery, and the other 10watts of that was diverted to the current load, which is all the devices inside and connected to the battery load side in the cabinet. 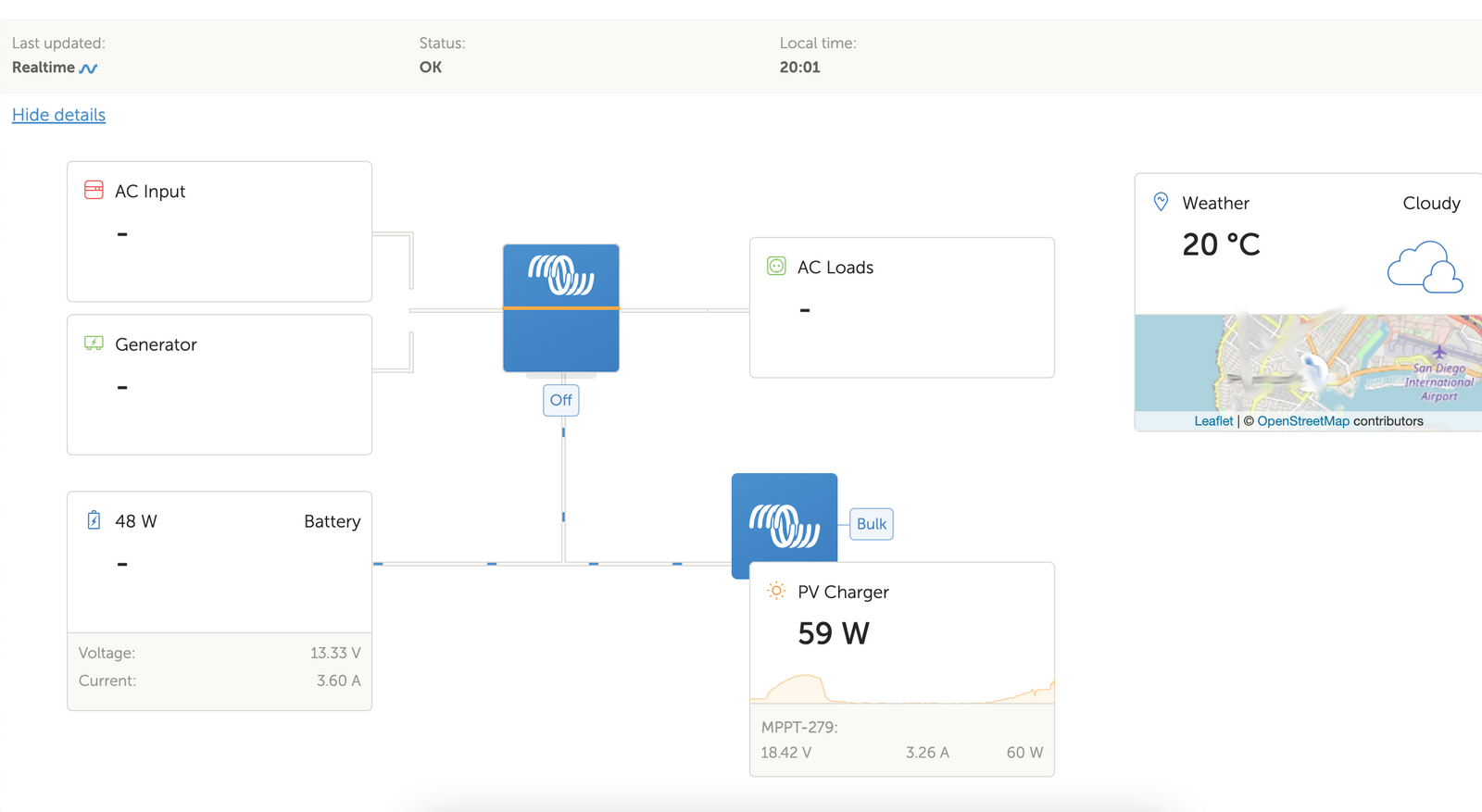 After running the Quasar cabinet on solar for several months, we have profiled the performance and observed about 4W is the average total load drawn by the internal components installed in the cabinet, this includes the wifi/lte router, mppt charger, PoE, 5V transformer. When we plug in a sample IoT device like Helium(HNT) Miner into the cabinet, we've seen those usually pull about 5 to 6watts on their own, which sums up the total cabinet power drawn to about 10watts. So, with the PowerTaur Charge battery which holds 1440 watts, that means the system should remain powered on for about 144 continuous hours of no sun, about 6 days.

Below are screen shots from the Portal, showing performance reports, and the last one is of the Remote Admin Console. 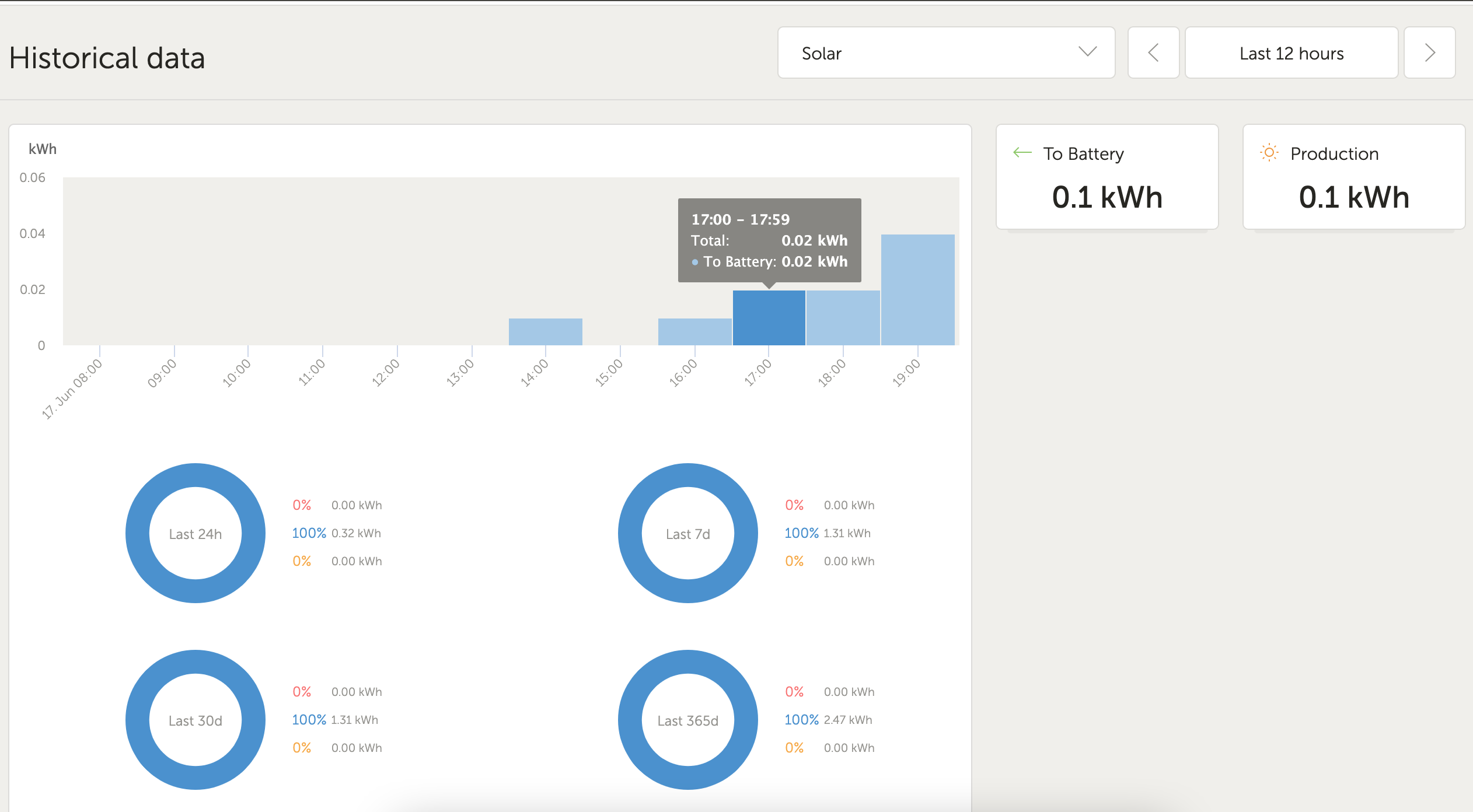 Put it all together with other components for complete solar powered off grid deployment. Can see the LMR-400 12' cable is attached here on the Application RF antenna port, it goes up to a LoraWan antenna on top of mast. 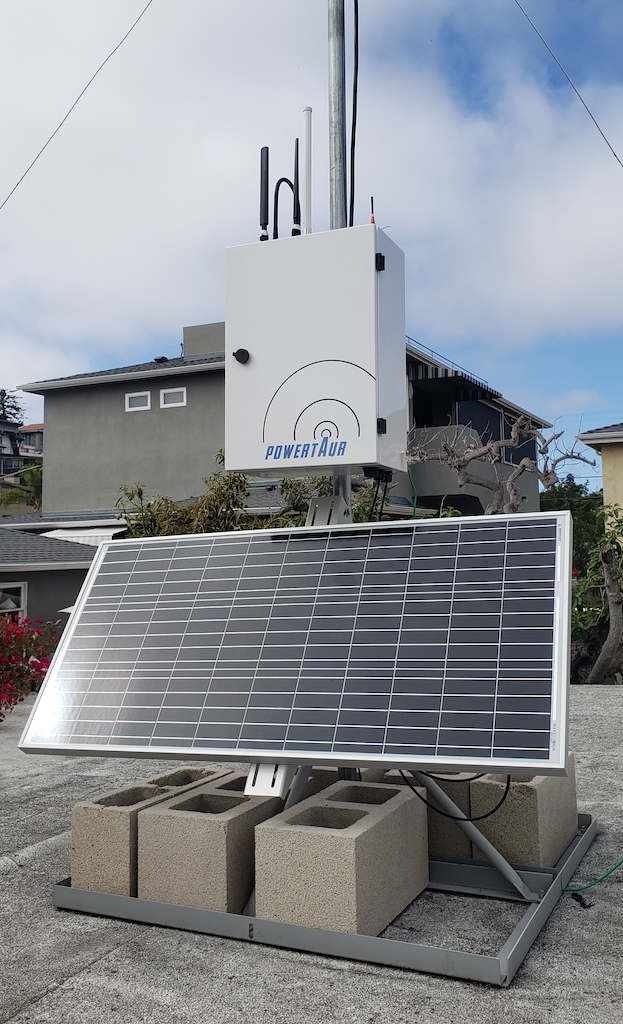 Here's how the cabinet looks on the Powertaur Elevate antenna mast kit, (3) 5' mast poles stacked for total of 15' of rise.